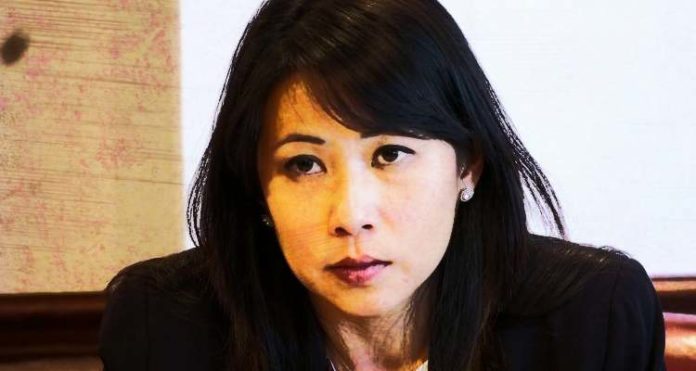 Self-described “moderate” Central Florida Congresswoman Stephanie Murphy now claims that if the President or his advisors deny ANY congressional request for information that it lays the groundwork for impeachment.

Having spent two campaigns for congress and nearly two terms as an elected member proclaiming to be a moderate, uber-wealthy Winter Park Congresswoman Stephanie Murphy’s facade has begun to crack.

It wasn’t but two weeks ago that Politico wrote a gushing profile on Murphy, heralding her as the “Velvet Hammer”, who swims between Republican and Democrat talking points when it suits her. They argued that this was a net benefit for the people of Florida’s 7th congressional district, yet failed to examine the very fact that her wishy-washy positioning is entirely emblematic of a politician who will do or say anything for a legislative victory.

Murphy has historically gotten a pass from the mainstream and alternative media alike, who endlessly drone on about her bi-partisan approach. However, their ability to do this in the upcoming 2020 election will become ever more ridiculous than in years prior. Ms. Murphy initially shied away from impeachment talk, but has now adopted the talking points of deranged Democrats like Jerry Nadler of New York who can’t get over the fact that no collusion or obstruction was found as a result of the Mueller report.

In a letter published on her website, Murphy claims that she will work with her allies in the Democrat party to enforce the rule of law if the President and his allies refuse to participate in the continued campaign of harassment being waged by subpoena happy members of Congress. What she fails to recognize is that the role of the Special Counsel was the process in which to bring charges against the President for the crimes of collusion or obstruction. Mueller’s conclusion that no collusion or obstruction was found marks the end of the investigation, not the opening for partisan politicians like Murphy to use their office on the taxpayer dime to continue a campaign of harassment against their political opponents.

Murphy is correct, not even the President of the United States is above the law. Her and the other Democrats upset over not getting what they wanted out of the Mueller investigation do not give them the reason or power to simply abandon the laws against using their congressional power for political gain. It does not give them an opening to virtue signal campaign talking points in their official capacities. Most concerning of all, it does not give people like Murphy or Pelosi the right to organize roundups of their political enemies based on fraudulent subpoenas, issued under false pretenses and with no respect for the rule of law.

Ultimately, Murphy’s metamorphosis into a partisan hack matters little if voters don’t give her the boot in 2020. Will they sit there and believe her political doublespeak during campaign season or will they give her hell at every opportunity?

The ever pompous Congresswoman doesn’t spend much time in the district and certainly doesn’t do events that are truly open to the public. Although, if you want to give her a piece of your mind… here are a few places you can do so over the next week.

According to Florida Politics, people are being asked to RSVP to “reduce wait times”, which constituents critical of Murphy have seen as a way to filter out unfriendly conversations at past events.

“The events are open to all residents of CD 7, but people are being asked to RSVP to reduce wait times. Residents can sign up by going through Murphy’s website, or through a Facebook events link.