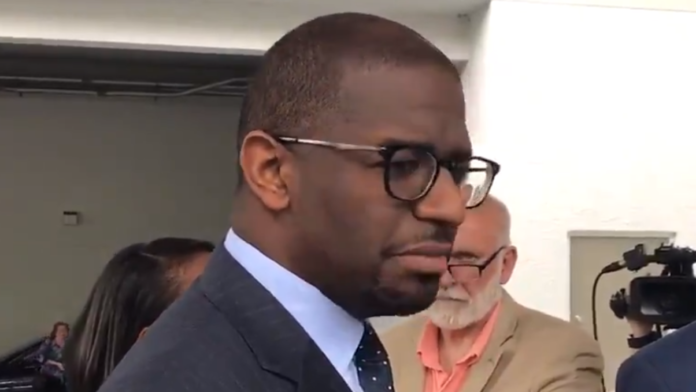 Gillum billed the ethics fine as a victory for his reputation… it was anything but. Published first at The Gateway Pundit.

Former Tallahassee Mayor and failed socialist candidate for Governor of Florida Andrew Gillum has opted to end the lengthy ethics investigation into him by paying $5000 in fines, the Sun-Sentinel reports.

Gillum illegally accepted numerous gifts from lobbyists during his time as Mayor of Florida’s capitol city, including trips to the Caribbean, tickets to the hit Broadway musical Hamilton and other luxury items. He spent the entire campaign against pro-Trump Republican nominee Ron DeSantis denying that he ever did anything wrong and claiming that he would be vindicated.

However, the settlement reached with the Florida Ethics Commission does not mean Gillum was cleared of wrongdoing… only that he was willing to pay a $5,000 fine to end the investigation before it dug any deeper into his alleged misdeeds. He also agreed to a count of accepting a gift from a lobbyist worth more than $100, which included a private, nearly 2-hour long boat cruise around Manhattan.

In an email to his supporters, sent through his Forward Florida political committee claiming that “facts matter” and that the Ethics Commission agreed. This is a blatantly dishonest ploy by Gillum, a rabid anti-Trump Magaphobe who is working to register throngs of felons across the state of Florida in an attempt to oust President Trump from the White House in 2020. He neglects to tell his supporters that he paid a $5,000 fine and was found guilty of accepting gifts from lobbyists.

FACTS DON’T MATTER IF YOU ARE A DEMOCRAT… especially one with a socialist streak.