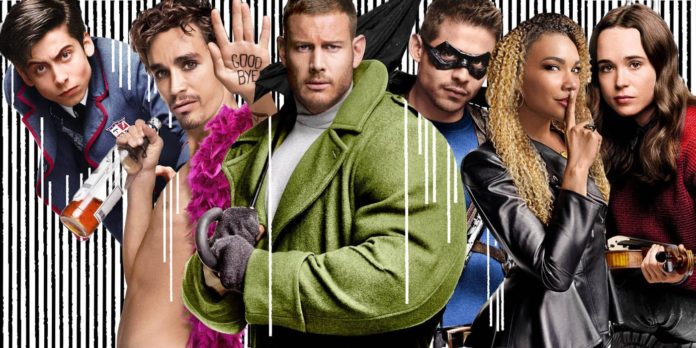 A twisted tale of a superhero family trying to prevent the Apocalypse.

Have you ever wondered what a comic book written by the lead singer of My Chemical Romance would look like, and then subsequently wondered if they would make it into a Netflix series? Well, you are in luck, as Netflix has brought The Umbrella Academy, a twisted tale of a superhero family trying to prevent the Apocalypse.

From start to epic finish, The Umbrella Academy is non-stop action and adventure.

Sir Hargreeves, known in the comics as the Monocle, adopted seven superpowered children, all born at the same time from women who previously were not pregnant. To the Monocle, these seven children were “destined to save the world,” and it was his duty to train and prepare them.

Unfortunately, his Messianic desires for these children makes him cruel, abusive. The children were addressed by numbers, supposedly based on how “important” they were.

You have Number One, Luther, the strong leader of the group who, after being injured in a mission, was mutated into a half-man, half-gorilla.

Number Two is Diego, the knife-throwing vigilante who continues to be a thorn in the side of local police.

As we go down, we see even more powerful children, including Allison (#3), who can make anyone believe anything if she starts the phrase “I heard a rumor”; Klaus (#4), the black sheep who uses heroin to numb his ability to speak to the dead, including Number Six, who can produce interdimensional monsters from his body.

But this story isn’t about the abuse and training these children have taken. That would be too normal for a story that also includes a talking chimpanzee butler and a time-travelling Mary J. Blige.

Rather, our story takes off with Number Five, who can jump between space and time, and after disappearing one day, he finds himself in an apocalyptic future that he must now prevent, with the help of his dysfunctional family.

Number Five, played by 15-year-old Nickelodeon actor Aidan Gallagher, provides fun comic relief as he travels between past and future, deceiving temporal assassins with foxlike cunning, and providing snarky wit to the incompetence of his siblings.

But when truly analyzed, this story is not about any of those family members. It’s about Number Seven, played by Ellen Page, the only not with “powers”.

There is not much that can be said about Number Seven and her character trajectory without spoiling the plot. But her story is a painful one that shows the importance of love, family, and acceptance.

Seven was rejected by her family, told she is ordinary despite being the most powerful member of the team. The damage she faces will be familiar to those suffering from low self-esteem. It’s familiar and real, and as the series progresses, dangerous.

Season 1 of The Umbrella Academy is streaming now on Netflix for your binging pleasure.