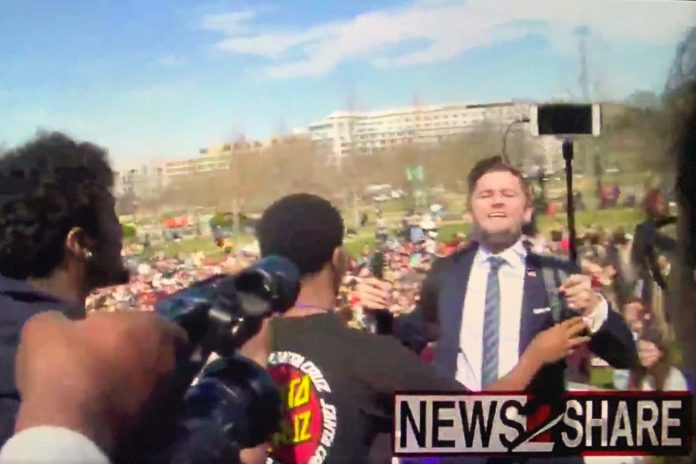 Filmmaker Ford Fischer caught the confrontation, which demonstrated the scary pack mentality of far-left groups like March for Our Lives and #WalkOut when confronted by opposing viewpoints.

The throng of brainwashed zombies did not respond well to his presence or Cella highlighting the the fact that if they are all about preserving life, then they should be protesting abortion nationwide as well. Filmmaker Ford Fischer caught the confrontation, which demonstrated the scary pack mentality of far-left groups like March for Our Lives and #WalkOut when confronted by opposing viewpoints.

This afternoon, I went to the #WalkOut Against gun violence, where high school students left class to advocate for gun control.

There were only 2 counter-protesters. One, who ID’ed himself as @ChrisCella_Jr, heckled a shooting survivor talking about abortion and was pushed away. pic.twitter.com/WfjPepiFNq

Cella told The Gateway Pundit  and The Central Florida Post that he felt extremely unsafe and was threatened with physical violence several times.

“I was merely trying to get people to see the hypocrisy of having a march ”for our lives” while they openly support Planned Parenthood’s streamlined conveyor belt process of murdering babies. Multiple people shouted racial slurs and were threatening to “beat the shit” out of me if I did not leave the rally.”

He went on to highlight how the anti-gun movement regularly uses high school aged children, or younger, as political props.

“These people like to use children as props when it suits them, but when referring to an unborn baby, they call him/her a ’clump of cells’ in order to dehumanize them.”