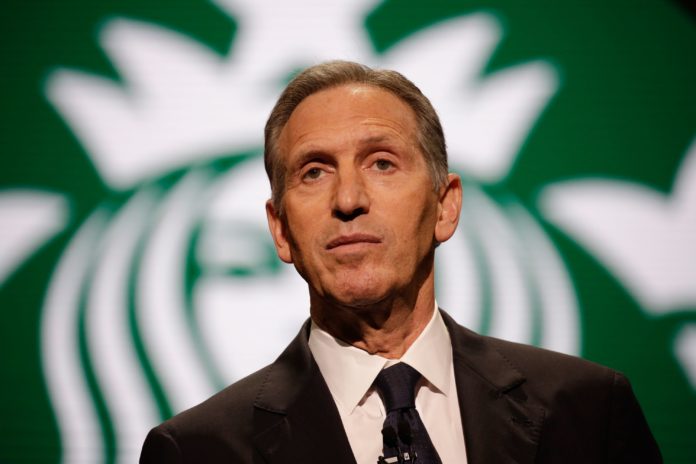 At the end of the day, Schultz did not give us new centrist ideas, just the same centrist complaints fused with progressive talking points.

If you are a centrist like myself, you may be anxiously awaiting an independent bid, possibly from someone like former Governor John Kasich (R-OH) or Senator Ben Sasse (R-NE).

Who you would not be expecting to take the mantle is the guy who can’t even get your name right at his coffee shop.

Howard Schultz is considering running for President as an “independent centrist”. But his town hall meeting shows us that Mr. Schultz is more of a progressive version of President Trump than a political moderate.

Schultz did his best to pull away from his similarities to the unpopular President, focusing on his life in poverty and how that shaped him to create Starbucks, the ultimate social justice company. But it is not running a multibillion-dollar franchise that makes Schultz a qualified President. It’s, according to him, “what he’s learned along the way.”

“What’s missing right now is a deep sense of leadership,” said Schultz, on one of many attacks on the President.

Those were the themes of Schultz’s message. Leadership. Understanding. Humanity. You know, Starbucks values.

Schultz lambasted political incompetence and corruption, rehashing talking points from Trump’s 2016 campaign. At one point, when asked about VA reform, Starbucks spent two-thirds of the question talking about how Starbucks hires military veterans, before finally stating firmly “I will fix the VA!” Compare that to President Trump’s RNC speech, when he said “I alone can fix it!”

Schultz may also have a shady foreign influencer as well, in this case in China. Schultz defended Chinese interests during the town hall, not unlike President Trump’s defense of Russia. Perhaps this is because Starbucks worked with the communist regime, and Schultz still owns $2 billion in stock, which he would not commit to selling.

Schultz tries to play himself as a centrist, but continued to espouse progressive talking points, opposing the border wall, supporting gun ownership restrictions, and promoting globalism.

Where he disagreed with progressives only seemed to be with his pocketbook. He called out the Green New Deal and Medicare For All, as well as higher taxes for the wealthy.

At the end of the day, Schultz did not give us new centrist ideas, just the same centrist complaints fused with progressive talking points. He won’t run for President as a Democrat, but Howard Schultz certainly is running as a Democrat. Specifically, a Democratic version of President Trump.