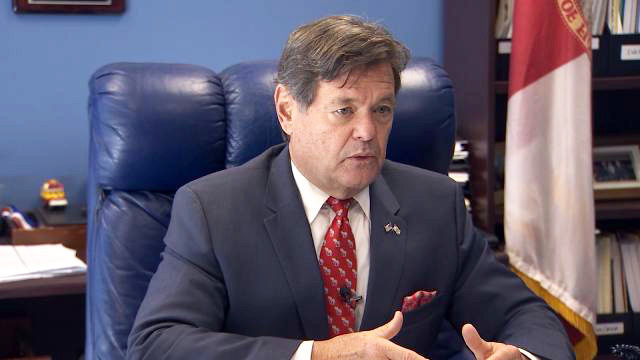 Long known as “The Lion of Seminole”, Mr. Constantine history as a ladies man has taken a turn for the worst.

Everyone knows that Lee Constantine is a charmer and has done his share of completely consensual womanizing during his time as fixture in Seminole County politics over the past three decades. Nobody will dispute that, not even Lee.

I quite like Mr. Constantine and have shared a drink or two with him at the Eden Bar located outside of the Enzian Theater in Maitland, one of his favored locales. He has a larger-than-life personality and even bigger ego, but in politics you have to think your able to do things better than the other guy or gal… and more often than not Constantine has done great things for the people of Florida.

However, this past weekend, a disturbing news report aired on WFTV, detailing an instance of sexual harassment involving Commissioner Constantine and a college aged intern on loan from UCF to help his non-profit Charity Challenge. The alleged sexual harassment happened last May during an event at Camping World Stadium.

The student, who has yet to be named, has come forward with what most view as credible allegations against Constantine. Her claims have been documented in a letter the student provided to the Seminole County Commission.  During the event, according to the intern, the Commissioner played with her hair and started massaging her. He visited her again and tickled her sides “from behind”, according to the letter, which was exclusively reported by WFTV’s Shannon Butler and Jason Kelly.

The woman’s allegations were deflected by Seminole County to the University of Central Florida, before UCF ultimately told the girl to contact Seminole County.

Like any crime, I believe that the accused (Constantine), should be innocent until proven guilty. He should have the opportunity to defend himself and debunk these charges. If it exists, surveillance footage should be gathered from Camping World Stadium and reviewed to determine if any video evidence exists of the alleged sexual harassment of the young woman.

While I want to give Commissioner Constantine the benefit of the doubt, WFTV has also reported that UCF has terminated their longstanding relationship with Constantine’s Charity Challenge non-profit, and claims to have interviewed a potential witness who saw the harassment in real time.

“On Monday, UCF told 9 Investigates that it investigated the intern’s claims and interviewed a possible witness at the event and previous interns, but the discussions did not yield any solid information.

The university said its Department of Political Science and its Rosen College of Hospitality Management had provided Constantine’s office and charity with interns in the past, but it will no longer do so in the future, for the safety of its students.

The school said it will no longer include job listings for Constantine’s office or charity at student career fairs.”

Even more disturbing, WFTV stated that Constantine had initially taken their calls for comment on Friday when the story broke, but has since vanished from the area.

“Constantine returned reporter Shannon Butler’s phone calls Friday, but when she visited his office Monday, she was told he is out of town.”

Getting “out-of-dodge” is the last thing you want to do when credibly accused of sexual harassment as a public figure or elected official. We still do not know who is telling the truth, but the fact that UCF has severed their relationship with Constantine and that he has “skipped town”, certainly doesn’t portray the brave face that the Commissioner should be displaying to members of the community who have trusted him as a public servant for decades and maintain he is innocent of these charges made against him.

Constantine has largely avoided backlash over the alleged encounter, but a Change.org petition began circulating over the weekend calling for him to resign.

Moreover, rumors are abound regarding Constantine’s position with the Orlando Sentinel as a guest columnist in their “100 Words” series that allows community stakeholders to sound off on important issues, both political and societal. The paper has yet to cover the sexual harassment allegations against Constantine and are reportedly ready to publish his defense in the form of a “100 Words”.

According to our sources, the paper, which has seen numerous staff shakeups and consistent layoffs over the past few years, is torn between allowing Constantine to defend himself to the public before they cover the story on their Central Florida Political Pulse blog. Hurting for readers and eyeballs, the newsroom is currently in favor of publishing Constantine’s side of the story before lending a voice to his accuser or potential witnesses discovered by officials at UCF.

The Orlando Sentinel should be ashamed of that choice and should immediately suspend Constantine’s “100 Words” column until the charges are fully investigated. Call him for comment on an article that allows both sides to speak? Of course, that’s journalism. Allowing Constantine a prime spot to potentially snipe at his accuser makes the Orlando Sentinel the PR wing of his political and public persona, at the expense of his accuser.

This is an ongoing story, one which we will continue to cover when Commissioner Constantine surfaces again in Central Florida.