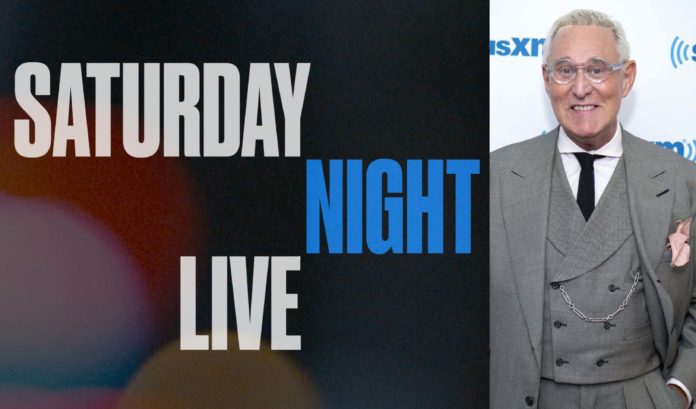 In the past, Stone has pined for James Woods to play him in any narrative film adaptions, but it remains to be seen who will suit up to become the Dapper Don of Dirty Deeds for the legendary television show that features comedy skits, satirical news and popular musical acts.

This weekend’s Saturday Night Live broadcast featuring Steve Carell, which was a re-run, featurinig a promo teasing the show’s upcoming weekend updates. Stylized after the teaser for season three of Netlix’s Stranger Things, it was light on details and instead just revealed the titles of the politically themed skits that fans can look forward to over the next few months.

Almost all of them center around the Trump administration, from Trump’s Gambit, The Giuliani Debacle, Who Framed Roger Stone, The Kushner Paradox, Martin Luther King Day Is Cancelled, Return of the Tax Returns, The Case of the Invisible Wall, Mueller’s Last Stand, Escape to Argentina and Are We All In The Upside Down?

Of course, these are all hits on the Trump administration.
The staff is not allowed to mock crazy liberals.

The most exciting episode to look forward to, is Who Framed Roger Stone. Trump’s longtime friend and notorious political dirty trickster is caught in the cross-hairs of Robert Mueller’s highly partisan Russian collusion delusion. Stone has lived a colorful and immensely successful life as an advisor to presidents and is undoubtedly the most recognizable political operative of our time. His exploits were chronicled in Netflix’s hit documentary Get Me Roger Stone, which remains one of the streaming platforms most popular and watched releases.

In the past, Stone has pined for James Woods to play him in any narrative film adaptions, but it remains to be seen who will suit up to become the Dapper Don of Dirty Deeds for the legendary television show that features comedy skits, satirical news and popular musical acts.

SNL’s title Who Framed Roger Stone is a play off the fundraising efforts for Stone’s legal defense fund, that has featured branding and promotional material with the very same wording. You can donate to his fund and help him fight the deep state at whoframedrogerstone.com