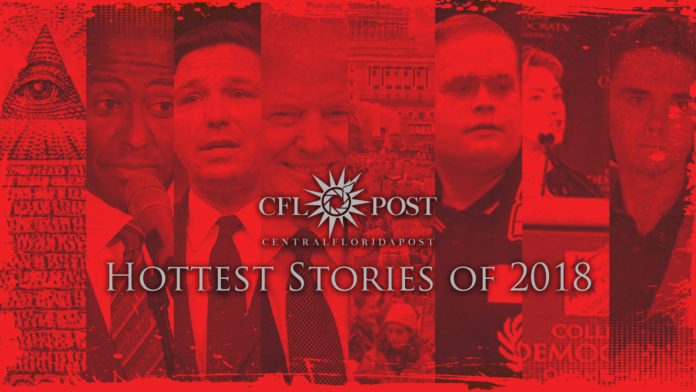 Those who have been following us for the past six years know that we have always brought you stories that other news publications simply cannot or will not.

Each year on New Year’s Eve, we take stock and review our biggest stories. Several factors go in to how we determine which stories make the cut, including it’s digital reach and raw clicks. Those who have been following us for the past six years know that we have always brought you stories that other news publications simply cannot or will not. They are afraid of lawsuits, taking chances, ruffling feathers.

The landscape post 2016 and the election of Donald Trump has given rise to many allies online who have adopted our in-your-face style, which has allowed us to reach more people with our news. It has also made us work harder to get you the news that you deserve, before anyone else.

1). Gillum Staffer Calls Republicans Dumb***** & Deletes Pedophiliac Tweets: As the rest of the mainstream media in Florida and beyond was on their knees for Andrew “The Next Obama” Gillum, we had the courage and investigative talent to uncover deeply disturbing behavior from Gillum’s newly appointed Youth Director. Manny Orozco Ballestas had a history bigoted behavior, which included rape fetishizing, pedophilia, sexism and racism. Gillum tried to shame us and whine about Trump, but later shit-canned the staffer due to our coverage. He has never explained how a person who had a past of pro-pedophiliac tweets was put in charge of his youth operation.

2). THOT AUDIT: Internet Cam Girls Evade IRS: This story was a quick hit, but became surprisingly popular. Following an online call for cam girls and those using Snapchat premium services to earn money through sending titty pics to properly report that income to the IRS, the term #ThotAudit was born. It ruled the internet for several days and found feminists trying to reason that requiring women to pay taxes on selling their body was somehow “misogynistic”.

3). Proud Boys Stand Against Racist Cops, Despite Death Threats: Following the announcement of the BLACKOUT HATE rally by local black activists in Central Florida to highlight racism in the ranks of the OPD, the Central Florida Post announced that we would attend with any right-wing or conservative group who also wanted to address racism in local law enforcement. As a result of trying to bring left and right together to stand against racism, local leftists groups issued threats about our attendance and even developed conspiracy theories that claimed any conservative in attendance was secretly racist and trying to not appear racist by standing up to racism. Yeah… they are that crazy.

4). Trump Trounces Oprah In New Poll: After the mainstream media and Democrat establishment began pushing Oprah Winfrey as their best hope to beat Donald Trump in 2020, we commissioned the first poll analyzing a potential match up. Not surprisingly, Trump trounced Oprah and our poll made the rounds.

5). Florida Newspaper Pimps Pedophiliac Gillum Staffer: After less than two months of hiding in shame and just before the November elections, the Orlando Sentinel was so sure that Andrew Gillum would win that they did a rehab piece on his disgraced former Youth Director Manny Orozco Ballestas. We famously exposed his pro-pedophiliac, sexists, racist and bigoted behavior just a few months prior. The Orlando Sentinel failed to address the specifics of Orozco Ballestas’ behavior, instead deciding to make the feature article a puff piece for someone who they thought might serve in a high-level capacity in a Governor Gillum administration. Fortunately for Florida, Ron DeSantis was elected Governor and we don’t have to worry about perverts in the Governor’s mansion.

6). Creepy Christmas: The Legends of Belsnickel, Gryla, Rougarou: Though this story was published in 2017, it received a great deal of attention following the Thanksgiving holiday and leading into Christmas. One of our writers examined some of the more sinister and dark counterparts to jolly ole Santa Claus.

7). Candace Owens’ BLEXIT Campaign Caught Stealing Again: Though some think we exists to serve some ancient order of Alt-Right weirdos, we don’t and we call out people on both sides. In this story, we exposed Turning Point USA’s lead spokeswoman Candace Owens for ripping off other people’s work yet again for her own personal gain. Owens is a robotic barbie who is “conservative” for pay. She can blurt out a speech someone else wrote for her, can deliver a canned interview for sure. But a thief is a thief… IS A THIEF!

8). College Democrats Snub 9/11 Memorial, Hold Political Training With David Hogg Political Outfit: In a stunning bout of ORANGE MAN BAD, the UCF College Democrats refused to participate in a long held bi-partisan 9/11 memorial with the UCF College Republicans, citing “scheduling problems.” Their scheduling problem…? A political activism training from March for our Lives, David Hogg’s anti-gun group. So patriotic. Local Democrats argued that the College Democrats snubbing the 9/11 memorial for political activism training was actually more patriotic than coming together across the political divide to remember those who we lost on that fateful day. That is called mental illness.

10). Eustis Commissioner Files For State House: Our feature on then newly minted State House candidate Anthony Sabatini was a monster hit. Usually local inside baseball write–ups like this do well… but this one did VERY WELL. Sabatini is extremely well-liked and has promised an aggressive Trump’esque approach in the Florida capitol. Onward and upward!