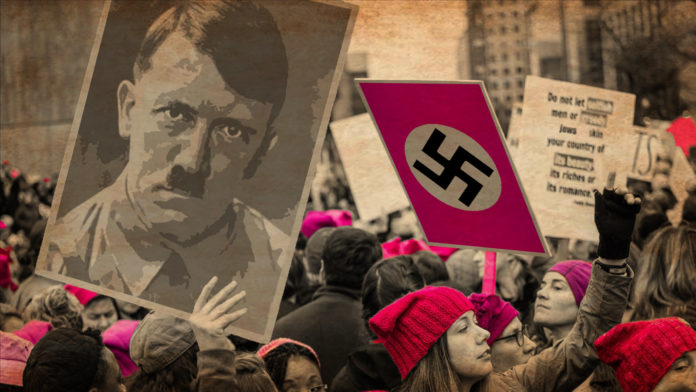 With the national leadership of the Women’s March is under fire for deep ties to rabid anti-Semites, the Central Florida chapter appears to have their own problems.

As the Central Florida Women’s March approaches, local organizers have yet to denounce an outbreak of Jew hatred and Hitler fetishizing within their movement.

Linda Sarsour and Tameka Mallory, both national leaders of the anti-Trump gathering, have been exposed in recent months for espousing anti-Semitic beliefs and associating with radical Jew haters like Nation of Islam leader Louis Farrakhan. Jewish journalist Laura Loomer first uncovered the nest of Jew haters several months ago when confronting Allysa Milano, a washed up actress who has assumed the role of unofficial spokesman for the movement.

At that same event, this reporter was attacked by attendees of the Women’s March, who identified themselves as “Knights for Socialism”, a campus group operating at the University of Central Florida.

Mubarak has also organized pro-Palestine marches in Orlando on numerous occasions, where attendees have been seen displaying flags for Hezbollah, a documented terrorist group that operates all around the globe.

Mubarak’s Israel bashing gatherings also featured a man by the name of Said Lufti or sometimes identifying as Shimon Peres, who verbally harangued a Jewish reporter interviewing attendees, decrying them as “piece of crap” Jews with the blood of Jesus on their hands.

At another event, Mubarak warns Lufti to not talk to the same Jewish journalist, stating “Uncle do not talk to them, they are Jews,” according to video posted by The United West.

To this date, she has never denounced this rabid display of anti-Semitism by her associate, or apologized for hosting rallies that served as a recruitment opportunity and radicalization center for local Hezbollah supporters. Hezbollah is labeled a foreign terrorist organization by the State Department.

Nationally, the Women’s March has come under fire for being “too white” by leftists and has been questioned about their close ties to the Nation of Islam, which the Southern Poverty Law Center identifies as a hate group that espouses anti-Semitic and homophobic ideals. Their leader, Louis Farrakhan has praised Hitler as a “great man”, referred to Jews as Satanic and has spent decades attacking Jewish people across the globe.

We reached out to the media contact for the Women’s March Central Florida earlier this week to ask them about their ties to Mubarak, and whether or not they planned on giving her a platform to spew her hate and use the event as another recruitment opportunity for her pro-Hezbollah associates.

Most recently, Mubarak tweeted in support of Ilhan Omar, a Muslim women elected to the United States Congress in Minnesota. Omar married her brother and fought against legislation trying to stop the barbaric practice of forced female genital mutilation. For years, Mubarak has also developed a close friendship with Linda Sarsour.

Specifically, we asked them to denounce statements made by Women’s March advocate Louis Farrakhan and Women’s March leader Linda Sarsour, who once said that Jews should not be “humanized.” Erica of Women’s March Central Florida, refused to denounce the following statements, declining to comment or clarify if she planned on giving Mubarak a speaking slot at their January 19th event in Downtown Orlando at Lake Eola.

“The Jews don’t like Farrakhan, so they call me Hitler. Well, that’s a good name. Hitler was a very great man.” — Louis Farrakhan in 1984.

“White people deserve to die, and they know, so they think it’s us coming to do it.” — Louis Farrakhan in 2015.

“It is now becoming apparent that there were many Israelis and Zionist Jews in key roles in the 9/11 attacks. Israelis had foreknowledge of the attacks… We know that many Jews received a text message not to come to work on September 11.” – Louis Farrakhan in 2015.

In 2012, she tweeted: “When we write the history of Islam in America, the Nation of #Islam is an integral part of that history.”

“If you’re on the side of the oppressor, or you’re defending the oppressor (Israel), or you’re actually trying to humanize the oppressor, then that’s a problem sisters and brothers, and we got to be able to say: ‘That is not the position of the Muslim American community.'”

For many local Jewish residents, this should be cause for grave concern. Why does the Women’s March of Central Florida continue to associate with known anti-Semites, and supporters of documented terrorist organizations and hate groups?

The Gateway Pundit will continue to monitor the Women’s March of Central Florida all the way through their rally on January 19th.