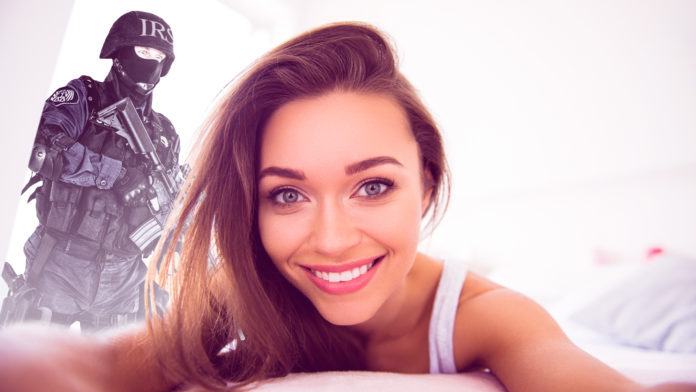 Women who dangle their naughty bits for money through Snapchat premium accounts are now being reported to the IRS for tax evasion.

Let me start by saying that the IRS sucks. Nobody likes paying taxes and we all work our best to pay what is legally required. Death and taxes are the only certain things in this life. PAY YOUR TAXES.

Before we go too much further, I have to explain what a THOT is. It stands for THAT HOE OVER THERE and is commonly used to describe your run of the mill basic bitch. The pumpkin spice latte toting, Uggs sporting, “I want a real man but keep screwing thin-dicked dude bros with Mustangs” type of girl.

She is never wrong, the world is always working against her, but somehow she keeps carrying on… well… because… she is #Blessed. The THOT may also utilize social media platforms like Instagram, or more primarily, Snapchat to profiteer through providing “premium” content to those who are willing to pay.

Most will swear up and down that they aren’t prostitutes or sex workers, they are just sweet girls trying to get by in a tough world. The right guy simply hasn’t come along and why shouldn’t they get a few extra bucks for flashing a little titty? I’m honestly not against this at all… YOUR BODY = YOUR CHOICE… as long as you are legally of age and corresponding with another adult.

But when one man, David Wu, dared to suggest that these THOTS be made to pay taxes on these “donations”, the whole lot of them went wild. They claimed it was an elaborate attack on from sexist lady hating right-wing trolls. Most who had denied the sex-worker designation were immediately crowing about being attacked for being a “working girl” just trying to get by.

In less than 48 hours, #ThotAudit was top-trending on Twitter and garnered over 15,000 tweets. Jack Posobiec, a lead commentator for One American News Network, created the hashtag shortly after Wu’s viral Facebook post.

Wait a second. I thought you shouldn’t be ashamed of owning your body and doing what you wanted with it? Nobody is saying that you can’t continue thotting online and in-person, some are just making the valid point that you should be paying your taxes accordingly.

By denying the fact that you should have to pay taxes or claiming that people reporting you for suspected tax evasion are somehow sexist monsters, you are basically positioning the profession of thotting in the same realm as tax-exempt religious or non-profit organizations.

So, if the THOTS do not wish to come under scrutiny by the IRS for potentially letting some earnings go unreported, they should just officially form the Church of Thottery and apply for tax-exempt status from the IRS.

If not, you are an online hoe and you owe taxes. If you already pay them… GREAT. If not, stop whining about being called out. Even Pablo Escobar paid taxes ladies. Beyonce, Kim Kardashian, Lady Gaga, and your other idols do as well.