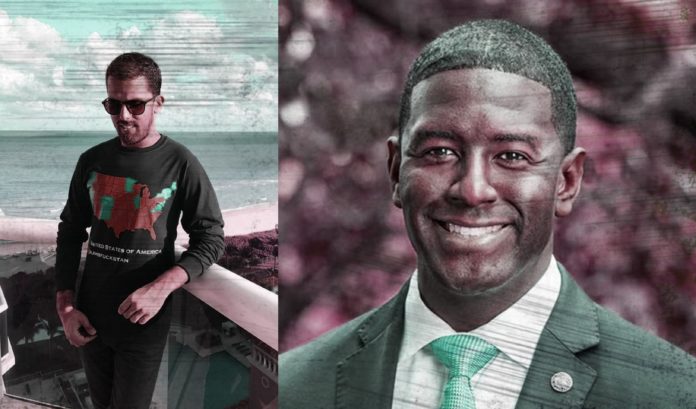 In an article published on Halloween by the Orlando Sentinel, writer Rachel Stamford seemed weirdly obsessed with rehabbing the political career of an operative who said Trump should be executed.

In the latest edition of why most people do not trust or respect the media… we have come across a very disturbing feature on the Gillum staffer who we exposed for making pedophiliac, rape fetishizing and racist tweets.

Manny Orozco Ballestas, who once served as Andrew Gillum’s Youth Director, was first called out by our publication for wearing a shirt that referred to anyone who didn’t vote for Hillary Clinton as “not American” and members of “Dumbfuckistan.”

Gillum’s campaign initially refused to fire the top staffer, instead engaging in whataboutisms about Donald Trump, but then we exposed a series of tweets from Ballestas that included his opinion that children using pacifiers were training to suck his penis.

You can reacquaint yourself with his disgusting behavior, which extended to fantasies about rape and the use of the N-word by reading the below article.

So why is it that the Orlando Sentinel is writing love-letters to such a disgusting human being? Writer Rachel Stamford refusing to address his actions directly and in full in her demented Halloween image rehab of Ballestas. She goes to great lengths to get positive quotes from Ballestas’ associates and friends, even giving Manny ink to lament how his reputation was tainted.

Oh the humanity! How dare anyone have held you accountable for being a sexist, racist, pedophliac tweeting weirdo that also called for Donald Trump to be executed.

This sends a clear message to the readers of the Orlando Sentinel and the Central Florida community as a whole. The Orlando Sentinel is trying to normalize sexism, pedophilia, racism, and political discrimination. They are “grooming” Ballestas for a future gig and mark my words… you will see him pop up again in some role politically or with the state of Florida if Andrew Gillum is elected.

His drive to be back around our youth and to poison our political system was too strong. And the Orlando Sentinel played right into his hand. SHAME. SHAME. SHAME.