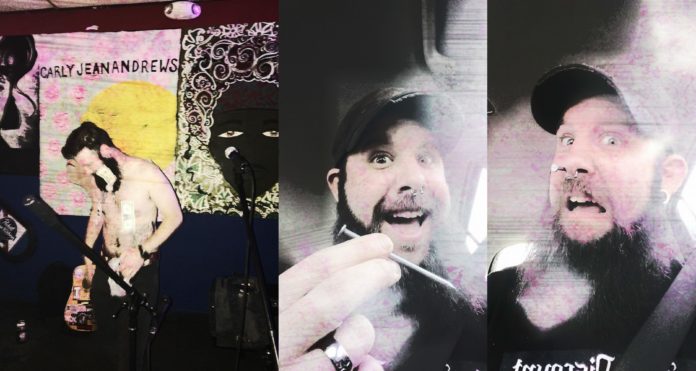 Thanks to Orlando’s newest Folk Punk troubadour, Pig Pen, a real deal sideshow is only a few minutes away.

Classic American staples of all sorts have been expanding in popularity over the past few years. From TV shows like American Pickers, to Sailor Jerry style tattoos and slicked back hair. The art of burlesque makes its way to many stages, and the same is true for hot rod collectors and vintage motorbikes.

One art, however, which has seemingly been passed over in the Americana Renaissance is sideshows, freaky people doing freaky things.

Sideshows featured all sorts of eclectic acts back in the days, from dangerous routines to the physically deformed. Most of the tricks were passed down through families, or lone wolves who jumped on board during their way around the country.

Modern commodities such as YouTube have eliminated the need to actually go see some live weirdness, Central Florida local Daniel Tosh even made a career of it. Sometimes you want to see the real thing though.

A live band should always be better than a music video, right? Thanks to Orlando’s newest Folk Punk troubadour, Pig Pen, a real deal sideshow is only a few minutes away.

Let’s start with the music. Pig Pen, armed only with an acoustic guitar and his bellowing breath, blends sounds of traditional Folk music and adds in a bit of grit. Folk music has always been the music of the luckless, though the words are always wiser than anything on the top 40. Like wagon wheels on an old gravel road, the music is true to the soul.

The other half of Pig Pen’s act is far less conventional. A true performer, Pig Pen displays a number of stunts he’s learned over the years from god only knows where. While I won’t give away all of them, I’ll let you in on this very dangerous one.

In a classic sideshow routine, Pig Pen gets a large nail (about ½ inch in diameter, and about 3 inches long), and proceeds to hammer the damn thing straight into his face. This isn’t a gimmick, folks. At an after gig get together I personally pulled this nail out, felt the friction, saw the goop…. it’s as real as it gets.

That’s all I’m giving away for now. Luckily, Pig Pen performs frequently in and around Orlando, so you will absolutely have a chance to see this routine and more in person.

Follow their Facebook page to keep in the know for shows. Pig Pen is incredibly true to his craft, and every minute is entertaining.

The show doesn’t stop when he’s off stage either, fans may staple their generous tips just about anywhere they’d like on Orlando’s newest and truest Sideshow Folk Rocker.

Born and raised in Orlando, and Socialist to the core, Patrick Jude graduated from The University Of Central Florida in 2015. He currently holds a B.A. in English Literature, as well as an A.A. in Jazz Performance from Valencia College. Jude is heavily tattooed, abstains from alcohol and is an avid Packers fan.

Currently Still Listening to Speaking In Tongues by Talking Heads