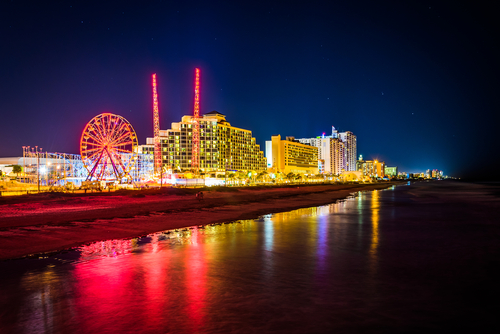 If you’re cruisin’ to Daytona, as beach season arrives, stick around when the day is done.

Friendly competition can be a rarity, especially in a business that isn’t posed to be a lucrative endeavor locally, booze and bands. Recently however, I’ve been hearing about the all too friendly relationship budding in Daytona Beach between local bars Tir Na Nog and Rok Bar.

The two are practically right next to each other. Despite this, the two bars have exemplified a business transcending respect, and the town loves it. As one local put it…

“Yeah [laughs] it’s kind of funny they’re right by each other. They’re cool with it though, which is cool. I know both the owners, and there’s zero hostility, the opposite actually.”

Both venues have steadily become beacons for Florida music, which only show signs of brightening their beach line. Hosting bands from literally every piece of our state, Tir Na Nog and Rok Bar continually feature acts spanning the genres; Punk, Jazz, Indie, everything.

Another major lure shared between the venues is their commitment to maintaining accessibility. I love supporting local musicians, believe me, $10-12 shows are getting out of hand though. Sometimes you don’t even know if it’s going to the bands anyways.

Both venues consistently offer low door charges, $5 -$8, and have long lasting reputations for paying their talent. The affordability also encourages patrons to jump between the two bars. Start the night somewhere, and end the night elsewhere. It’s a good recipe for any given night.

It’s a blessing to be able to see, and hear, live music on any given night of the week. Between the duo that’s now a reality in Daytona, and tangible live music needs that now more than ever. Local musicians are rapidly being replaced by the less than personal presence of DJ’s, which has its time and place, but that time should never be always.

We can all learn a thing or two from Tir Na Nog and Rok Bar. The big picture should never be lost in business, and art should never be exploited solely as such. If you’re cruisin’ to Daytona, as beach season arrives, stick around when the day is done.