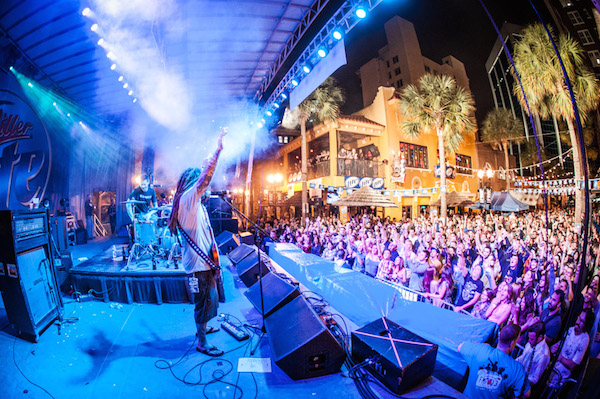 The Festival removed its massive headliners, but kept its massive stages… for the locals. Respect.

Orlando has its fair share of big weeks. Between the Pro Bowl and WrestleMania, 2017 has been packed since the start! April shows no signs of slowing down, and the city is prepping for its biggest music weekend. Kickin’ things off on 4/20, the streets of downtown Orlando will be filled with the bands and artists making up the 17th annual Florida Music Festival.

In what is truly a spectacular boost for local businesses, and local musicians, FMF and Axis Magazine’s efforts are indelibly valuable to the city.

After a fairly recent shift, FMF revamped its entire image by cutting out national acts in order to solely offer local talent. This also brought a massive drop in price, from $15 to FREE. Festival wristbands are readily available at most of the 15 stages, for nothing more than a valid I.D. (21+). The decision to focus on closer-to-home talent has without a doubt had a positive effect on the weekend, which has only seen its numbers rise since the change was made.

Favorite local spots, from The Social on Orange to Cheyenne Saloon on Church, will have music starting each day around 6 PM. The hop around nature of FMF makes it an opportunity to see a magnitude of bars in a unique atmosphere. Tons of bars, which normally wouldn’t host live music, push aside stools and rearrange in an eager effort to embrace the Festival.

The people of FMF also do a bit of rearranging themselves, as they amass thousands of dollars of sound and lighting equipment, into dual facing stages on Wall Street.That’s pretty cool.

The Festival removed its massive headliners, but kept its massive stages… for the locals. Respect. Well, it’s about that time in the article; you probably knew it was coming. Who do I think you should go see?

Pathos, Pathos and E-Turn have been stellar when I’ve seen them live, and represent two completely different music scenes around Orlando. Both will be playing The Social on Friday at 7:30 and 10:55 respectively.

Layla Brisbois will be doing a double set on Saturday, Magnolia at 7:00 and Church Street at 8:30.

Reverist always keeps a crowd moving, they’ll be at Wall Street on Friday at 9:30.

I rarely self-plug, but my band The Getbye will tentatively be renaming ourselves “The Get High” as we close out Cheyenne Saloon on opening night, 4/20.

In all honesty though, all of the music will be great and there will be something for everyone. One of the best parts about FMF is that everyone’s a neighbor; it’s a big ol Flawda Fest!