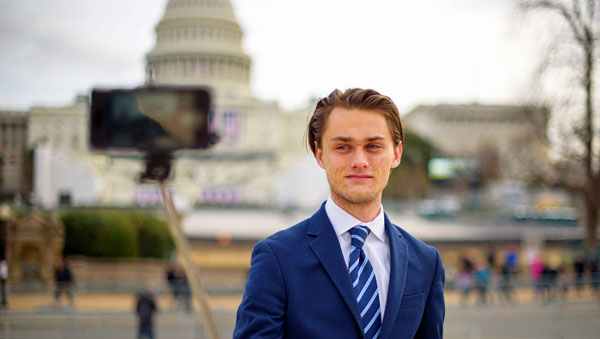 A thorough investigation by Rollins College determined that Marshall Polston did nothing wrong, despite outlandish claims from his Professor Areej Zufari.

Last week, Central Florida Post broke the national story about Marshall Polston being suspended by Rollins College for vehemently disagreeing with his professor.

We showed how her story of Polston threatening her was incorrect. We showed that Polston was doing what any college student should do, disagreeing with his professor and questioning what seemed like a retaliatory grade.

We said Polston did not deserve to be suspended.

In response, we were lambasted by liberal websites. We were called obscenities on Facebook. Even the Orlando Sentinel got in on the act, with their star columnist, Scott Maxwell, calling us a “blogger” and “fake news.”

Rollins College, after a long and careful investigation, in a letter obtained by Central Florida Post, concluded that Polston did not violate the schools code of conduct and that he was not verbally, physically or mentally threatening.

Of course,  the school, still struggling with the reality of their massive mistake, employed mealymouthed jargon to discuss Polston’s innocence, swapping “Not Guilty” with a ruling of “Not Responsible.”

Rollins even chastised Mr. Polston for being disagreeable with the professor, but mentioned nowhere the severity of her false police report or claims about Polston. We’re hopeful that Zufari will have to answer for those false statements in the coming weeks.

Attorney Kenneth Lewis, who is representing Polston, praised the school for the thoroughness of their investigation.

Polston felt relieved when we talked with him on the phone, but was worried about the stress the whole ordeal had put on his family and friends.

“My Mom has been so supportive of me. In return, many on social media have targeted her. This decision is a first step of many to rebuild my reputation.”

The Orlando Sentinel should look hard in the mirror to see who is the real Fake News. They reviewed some court documents and came to a conclusion Polston was a threat.

Maxwell’s column praised the Sentinel reporter for examining all sides and said this was just a right-wing publicity stunt, in his opinion. He wouldn’t mention Polston’s name to avoid giving him more “publicity” and wouldn’t name the professor because she had been victimized too much.

Now that Rollins has found Polston not guilty, isn’t he the true victim? Regardless of the publicity, this is a college student who has been falsely accused by his professor. His other studies have suffered. He was temporarily suspended from school. All because a professor made accusations that Rollins found to be untrue.

There are still questions to be answered and we will continue to look closely at what happens next. The Central Florida Post will follow this story and continue to update our readers with new developments.