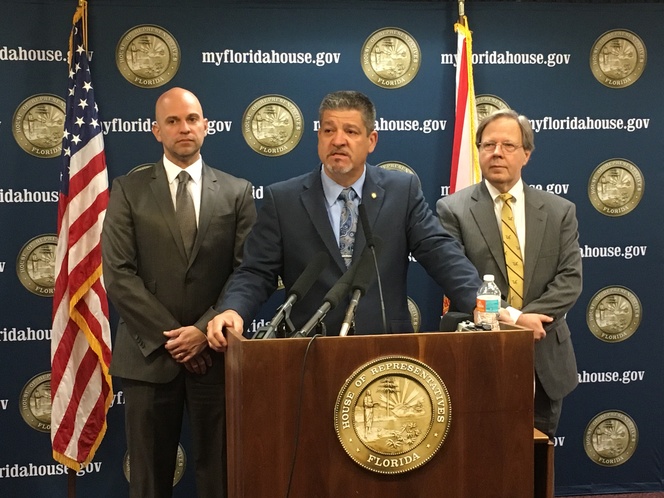 State Representative Bob Cortes opted to finish his work in the state capitol, after considering a congressional bid in Florida’s 7th district.

The man who would have been one of the toughest opponents for first-term Congresswoman Stephanie Murphy will pass on running against her in 2018.

In a statement, Altamonte Springs GOP State Representative Bob Cortes said he is still concerned over her lack of leadership, but has a job to finish in Tallahassee over the next few years.

“The reason why I took the urging so seriously is because I do believe that central Florida is being misrepresented by Mrs. Murphy and that she needs to come home. She has shown an immediate inclination to fall in lockstep with her caucus leadership in Washington instead of truly representing the people that elected her.

We just finished an election that was akin to a revolution. Americans across the land just loudly stated that they were done with the insider-driven politics and politicians that spend their time concerned only about what the beltway thinks.”

Mr. Cortes continued by saying that he and his wife were gratified by the outpouring of support, but that now is not the time. This is great news for the people in his state house district, because Bob is as best as they come for an elected official.

With Cortes out of the mix, State Senator David Simmons is the only “official” candidate, having done everything but file his paperwork to organize a campaign. Simmons is expected to loan his campaign upwards of $2 million dollars to capture the GOP nomination, according to our sources.

Our little birds also confirm that Simmons might not be the only self-funding candidate vying for the GOP nomination. Former Orange County Commissioner Ted Edwards is considering taking a shot at congress and is prepared to donate “millions” to himself if he decides to get back into politics in 2018.

High-level donors locally and in D.C. are pushing Winter Park Mayor Steve Leary to evaluate the race, pointing to his effective management of the city and new age brand of Republican politics.

Adams, who still has a sizeable amount in her federal campaign account, was the chief architect of the Violence Against Women Act when in congress. She served as an Orange County deputy and state representative before being elected to congress.

She famously grilled Eric Holder and the Obama administration of the death of Border Patrol agent Terry in connection to the government sanctioned Fast & Furious operation, which gave high-powered weapons to cartels that they would eventually use to kill Mr. Terry.

Her exposing Eric Holder during that hearing inspired then presidential candidate Donald Trump to mention “Fast & Furious” often during the 2016 campaign. Adams would be a top contender for sure in Trump’s GOP.

Seminole County Tax Collector Joel Greenberg has an extensive personal net worth to call on, but is only just starting to clean up the mess left by corrupt and longtime Tax Collector Ray Valdes whom he defeated in 2016.

Sources close to Greenberg say that while he is always looking for ways to serve the citizens, he is currently laser focused on supporting his wife during her pregnancy in his limited spare time.

“He just wants to have a happy and healthy family for now and understands that he made a contract with voters when elected. Joel’s focus will be on Seminole County for the next four years.”

Republican political consultant Jonathan Swift, who has advised Sandy Adams, Ted Edwards, Steve Leary, and Ken Bradley in the past, is expecting a “very crowded” primary.

“Sandy is the odds on favorite if she gets in. The fact that the GOP is encouraging so many talented people to explore their options is a sign of how strong our bench is. Stephanie Murphy’s odds are not looking good, but that does not mean whomever wins won’t have to work their butt off to topple her special interest funding.”

The Central Florida Post will provide more updates and commentary as this GOP primary for Florida’s 7th congressional district evolves over the next few months.