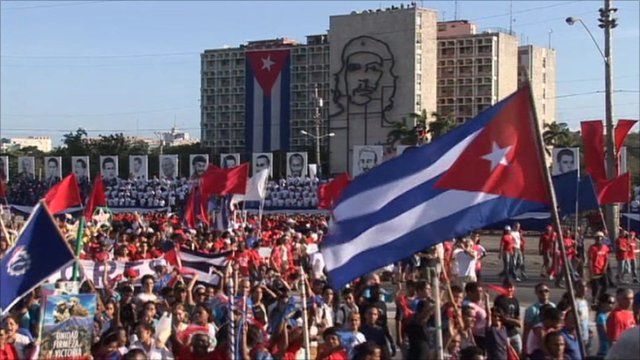 The oppression continues in communist run Cuba. Last month, the regime eliminated prominent Afro-Cuban dissident Harnell Santiago Mas Hernandez who was housed in one of the islands most brutal prisons.

With the recent passing of Cuban Dictator Fidel Castro, I think the State of Florida is in a unique position to help transform the communist government of Cuba. I want all to know that I stand ready to assist Governor Rick Scott in his endeavors to strengthen the Cuban pro-democracy movement in Florida with the hope of transitioning power from the communist elite to the hands of the people of Cuba. I also support Governor Rick Scott’s move to restrict Florida ports from engaging in further trade with communist Cuba. For too long, Cubans have been oppressed and it is time to move quickly and take advantage of this opportunity.

The recent normalization efforts by the former Obama administration have been a disaster for the common person in Cuba. The only people who have benefited are the communists still holding power with an iron fist. In fact, it can be argued that the recent overtures have made matters worse. We know for example, that before President Obama recently visited there was a crackdown on dissidents and dozens were arrested prior to his arrival. It has been estimated that by the end of 2016, there had been almost 10,000 politically motivated arrests.

What I also find most alarming is the tenfold increase of religious freedom violations that occurred from 2014 through 2015. Christian Solidarity Worldwide reported that in three provinces alone there were 100 churches demolished and others had their property seized. These conditions are no longer tolerable as we have accounts of week after week state security agents physically dragging and taking away during church services religious leaders viewed by the authorities as problematic. The crackdown on Christian leaders has continued well after the death of Fidel Castro. If anything, the recent overtures by President Obama have done nothing but embolden the communist thugs still in power.

Although Dictator Fidel Castro is gone, his brother Raul and his henchmen remain not only in control, but are increasing their power through cracking down on dissidents and by enjoying renewed economic activity through the family linked holding company, GAESA. Former President Obama and others were naïve to think that Raul Castro could be changed by simply opening our arms without any conditions attached. Looking back upon history, one can argue that Raul has been the true Marxist believer all along.

The oppression continues in communist run Cuba. Last month, the regime eliminated prominent Afro-Cuban dissident Harnell Santiago Mas Hernandez who was housed in one of the islands most brutal prisons. Also in the same month, a Pastor and his wife were imprisoned for homeschooling their children. Despite years of normalization efforts by the Obama administration Cuba remains the same communist run dungeon it has been for almost 60 years.

In closing, again I stand ready to assist Governor Rick Scott to help aid the Cuban pro-democracy movement in Florida including supporting dissidents, human rights activists, nongovernmental organizations and discouraging Florida ports from entering into formal agreements to further enrich the Cuban communist regime. If the United States continues its present course of action in allowing renewed trade with the communists in Cuba it will only allow the current brutal regime to gain access to US dollars thus empowering them to continue to oppress and impoverish their citizens.

As we know from history, fighting evil will eventually allow good to prevail. Looking at the recent democratic movements in Eastern Europe and South Africa, we now must muster our resolve and light a candle of freedom for Cuba.

Mike La Rosa is a successful businessman and realtor based out of Celebration, FL and currently represents Florida’s 42nd House District in Florida’s capitol.