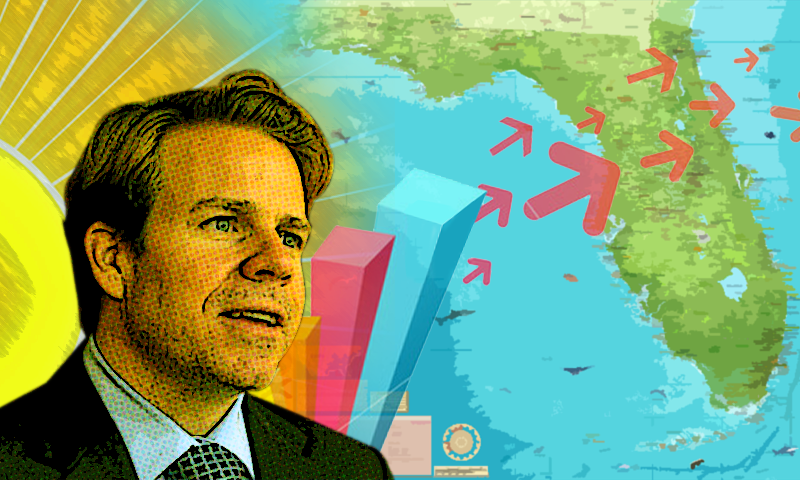 Yes, the sun is shining brightly once again in the Sunshine State.

Florida is enjoying an economic resurgence. We have not only climbed out of the economic abyss, we now have the 16th largest economy in the world! Our unemployment rate has dropped to less than 5 percent. We have a budget surplus and our population numbers continue to rise with more than a thousand people a day moving into our state.

Unfortunately, as sometimes happens in politics, we forget to look back at the pro-growth policies that helped return us to prosperity. It was not too long ago that Florida was facing economic ruin. The national news consistently wrote how the sun was setting on the Sunshine State. When Governor Rick Scott took office in 2011, Florida faced a $4 billion budget deficit, an unemployment rate of over 10 percent, record home foreclosure rates, out of control Medicaid spending, an unsustainable state pension system, and the loss of federal stimulus money.

So-called “experts” said we needed to expand the size and scope of government and raise taxes to pay for it. While many other large states did just that, Florida’s leaders chose to take a different path to stabilize our economy and ultimately bring back growth. Fortunately, Governor Scott and the Florida Legislature said NO to raising taxes, NO to new business regulations, and NO to expanding Obamacare. Instead, they cut taxes, reformed the state pension plan, and converted Florida’s Medicaid system to provide better care and budget stability. These common sense reforms created predictability and certainty for business owners looking to move to Florida and for those wanting to keep their businesses here.

Since 2010, 1.2 million new private-sector jobs have been created in Florida. Home prices are rising and we have a healthy  budget, proving that thoughtful, prudent political leadership can provide the economic stability needed to grow jobs and increase opportunities for its citizens without taxing them more. It’s an example that our federal government should follow. In contrast, states like California, New York, and Illinois listened to the so-called experts and are still struggling with out-of-control budgets, pension shortfalls, and higher taxes.

Yes, the sun is shining brightly once again in the Sunshine State. As we move forward it’s important to be mindful of the tough decisions that were made which revived our economy and not give in to the temptation to spend more because we have more. Our businesses, our economy, and our future depend on it.

Mr. Haridopolos served in the Florida House of Representatives before being elected to the Florida Senate and eventually as Senate President from 2010 to 2012. Currently he is a top political analyst for Fox35 and regularly writes for publications around the state on politics and elections.