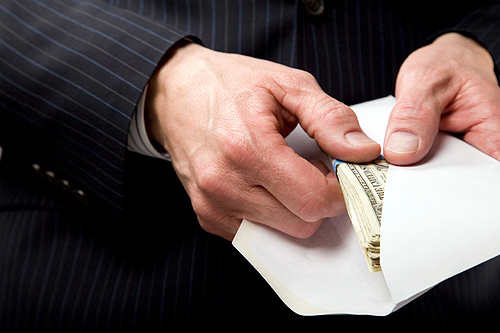 Developer gives $10k to Pro-Rinehart PAC, right before Rinehart votes to give the developer $200k in city property.

The oldest adage in journalism is “Follow The Money.”

When a developer gets a sweetheart deal from local government, the money does not lie.

Margus Mahar is an Orlando developer who recently received a very lucrative deal from the St. Cloud Council.

At the October 27th Council meeting, Margus Mahar was given approval for his massive project and a free piece of city property, valued at $200,000.

St. Cloud did not use any type of competitive procurement process in selecting this developer, as is customary in these types of public/private development deals.

This developer was hand picked by Councilman Jeff Rinehart, who brought Mr. Mahar to the city staff.

On October 13th, this same Margus Mahar made a $10,000 contribution to a Political Committee supporting St. Cloud Councilman Jeff Rinehart’s bid for Mayor.

The name of this PAC screams irony, it is called Floridians for Responsible Government.

What exactly is “Responsible” about developers making massive soft money donations to a shadowy PAC supporting a council member, while that developer is negotiating a deal with the City Council?

Another contributor to the Pro-Rinehart PAC is Sun and Moon Therapies.

The address listed for them is a home owned by Jeff Rinehart.

This seems to indicate Mr. Rinehart has some level of direct involvement with the PAC.

Griffin and Rinehart were close allies when Griffin served on the City Council.

We asked Mr. Griffin if Rinehart was paying market rent for the house or if he was getting a VIP discount, Griffin refused to answer.

This also seems to indicate Mr. Rinehart has some level of direct involvement with the PAC.

Shamrock Auto Body and The Gun Store Inc. are the other St. Cloud businesses that contributed to the PAC.

Mike Reilly, owner of Shamrock is a close friend of Rinehart.

Jerry Brown is the owner of The Gun Store and his company has donated directly to the Rinehart Mayoral Campaign Fund.

Brown admitted his involvement with the Pro-Rinehart PAC in Facebook comments on the Osceola Politics Uncensored Page.

The Pro-Rinehart PAC has already sent out two negative mail pieces attacking Nathan Blackwell, who is Rinehart’s opponent in his bid for Mayor of St. Cloud.

With the hefty war chest the PAC has secured, several more negative mail pieces are expected.

We have already established Councilman Jeff Rinehart has run the dirtiest campaign in the history of St. Cloud politics, but this is a new low.

Using a sleazy PAC funded by his cronies, his tenant, his landlord and a hand picked developer, Rinehart is displaying his inner is Boss Tweed.

Why did St. Cloud forgo a competitive procurement process when selecting a developer for this project?

This corruption perpetrated by Councilman Jeff Rinehart is a black eye to St. Cloud’s reputation and an insult to voters.