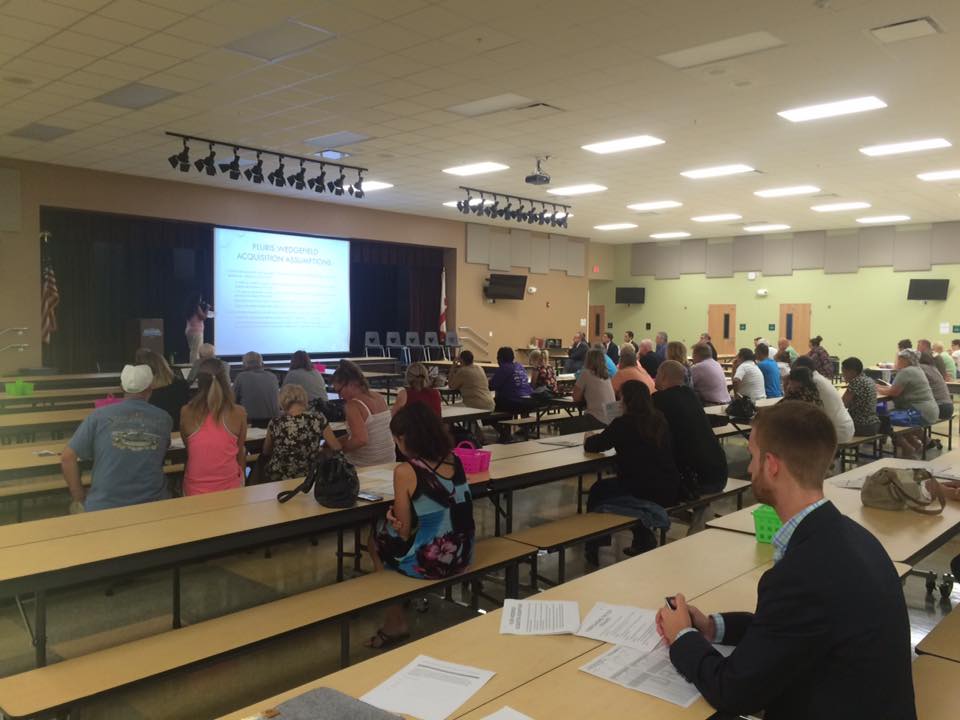 Packed into the newly constructed Wedgefield School in East Orange County, homeowners and residents in the far east community of Wedgefield learned they could pay significantly less for their water, if Orange County is able to purchase Pluris Water.

If you have been following the developments about Wedgefield residents water woes, you are aware that they pay up to six times more for their water. Currently, their private water provider, Pluris, has come under fire for releasing tainted and toxic water to residents homes.

For years, residents have been complaining about the high prices and “smelly water”, but their outrage reached an all time high earlier this year, when it was revealed the company had been improperly storing and releasing tainted water.

“We want this to be community driven and supported by the residents. Our plan will lower costs and most importantly, provide clean water,” Edwards told us at the meeting.

Wedgefield Homeowners Association President Mike Nolan was on hand to answer questions after the presentation, along with State House District 50 candidate Sean Ashby.

You can see in the below document just how much residents could stand to save with the switch.

Dolan was excited and supportive of the proposal from Edwards and Orange County, but reminded homeowners that their support is needed for the plan to be implemented.

“Commissioner Edwards and the folks from Orange County have worked hard to find a solution and we are grateful for their efforts.”

Sean Ashby, who is taking his second shot at representing the area in the Florida House, shared with residents that there could be additional funding sources to assist Edwards’ plan.

“We can incorporate already funded state dollars into the plan to help lower the costs of the water in Wedgefield,” explained Ashby to nearly 100 residents.

Those who attended the meeting were furnished with a hard copy of the slideshow, which can be seen below

“After the election I had to think long and hard about who to support. Commissioner Edwards promised he would address my concerns over Pluris and many other issues important to District 5 residents. Tonight, he delivered,” concluded Eisenberg who plans to campaign for Edwards during the next 39 days heading into the election.

For the plan to actually work, Pluris officials would have to agree to the sale of the company, and Edwards said he is working hard to make that happen.

The East Orlando Post will continue covering this story as it develops, so stay tuned!