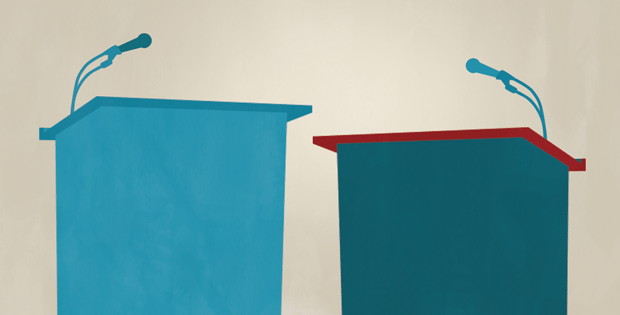 Hosted by the Orange County League of Women Voters and moderated by political analyst Rick Foglesong, the forum was full to the brim. As voters start casting ballots, here are our four key takeaways about the candidates and how they performed.

Eisenberg Has A Bright Future

The millennial first time candidate was on fire. From substantive plans for District 5 on transpiration, technology, and clean water solutions for the impoverished area of Bithlo. Eisenberg also addressed the significant and problematic financial history of Timothy McKinney, quipping that the taxpayers should not be on the hook to settle his debts through a commission salary if McKinney were to be elected.

While extremely feisty, he did not come across as beliggerent or rude, hitting a sweet spot that most candidates can’t attain during combative debate exchanges. Look for Eisenberg to surprise on election day.

First off, Commissioner Ted Edwards knows how to command a stage and is an old fashioned retail politicker. Politely standing to answer most of his questions during the forum, he remained calm and collected. The best strength of Edwards is his ability to point to specific solutions, describe the complexities of the governmental process, and why it is important to evaluate problems with a full scope.

When the debate turned to the Lake Pickett area developments, Edwards expertly explained the fact that the radical NIMBY (Not In My Backyard) also wanted to stop communities like Avalon Park nearly three decades ago. Since then, Avalon Park has been the crown jewel of East Orange, and he says the new projects have been vetted and developers have given more than they ever have to improve our fractured roadways.

Bonilla Has Heart, But Needs To Get Specific

Environmentalist and anti-growth activist Emily Bonilla showed some heart at the forum, but needs to brush up on specifics and her campaign platform. Her ability to organize volunteers for her efforts against Lake Pickett and get earned media is on point, but she needs to capitalize on those news hits to share her vision in a concise and clear manner.

As expected, McKinney stuffed the room with a radical group of isolationists who are against progress for Orange County. Regularly disrupting the debate rules and structure, this gambit actually made him look less appealing.

When repeatedly questioned about his long history on defaulting on mortgages, loans, credit cards, and other debts… he refused to address how that would effect his ability to manage county finances.

He did have a few jabs that landed on Edwards, but smarmy remarks don’t win elections. Until he answers voters about his financial fitness for elected office and liens/environmental fines against his charity in Bithlo, voters should be wary.

Election day is on August 30th. If no candidates fail to get above 50%, the top two vote getters will face off in November.