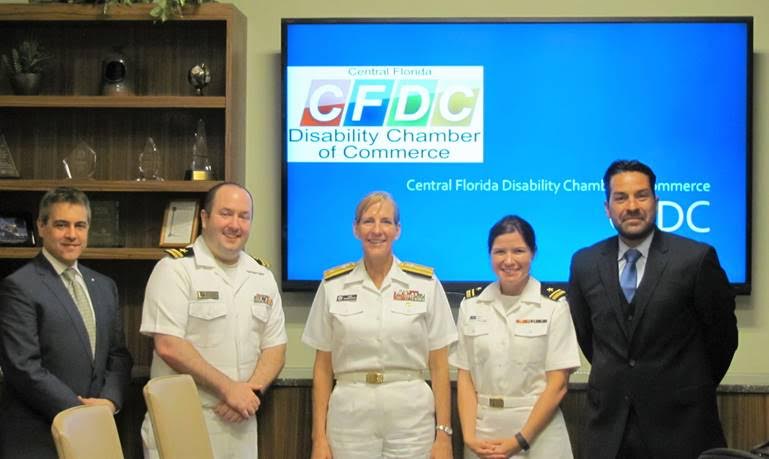 Rear Admiral Ann Burkhardt of the U. S. Navy paid a special visit to the Central Florida Disability Chamber of Commerce (CFDC) and its board of Directors to discuss transitioning services for Military veterans and their spouses through the CFDC Veterans Business Initiative.

Admiral Burkhardt gave praises to the Veterans Business Initiative and the work that the Central Florida Disability Chamber of Commerce does for all our military veterans in transitioning back into the workplace.

“Our veterans accepted the responsibility to defend America and uphold our values when duty called, now it is our responsibility to make sure they have an opportunity to meet with decision makers in the job market who do the hiring” stated Rogue Gallart, President of the CFDC.

Burkhardt explained that The 21st Century Sailor and Marine initiative is a set of objectives and policies, new and existing, across a spectrum of wellness that maximizes each Sailor’s and Marine’s personal readiness to hone the most combat effective force in the history of the Department of the Navy (DoN).

This initiative will advance progress by leveraging programs under the following five areas. Readiness, Safety, Physical fitness, Inclusion and Continuum of Service.

Individuals preparing for either separation or retirement will be afforded myriad assistance programs and benefits that are available to them as they transition to civilian life.

These programs, which include education benefits, transition assistance, career management training, counseling, life-work balance programs, and morale, welfare and recreation programs have been recognized by human resource experts as some of the best corporate level personnel support mechanisms in the nation.

Admiral Burkhardt graciously presented Rogue Gallart with a recognition coin for the chamber’s work in helping our military veterans and their spouses. The visit concluded with National Entrepreneur Center president Jerry Ross hosting a tour of the facility highlighting the many services and partners dedicated to this mission.

The Central Florida Disability Chamber’s Veterans Business Initiative has a proven track record and is supported by its many partners.

The largely successful program has assisted more than 260 veterans with a 46 percent success rate in career placement. The Veterans Business Initiative is the first of its kind in Central Florida and occurs in the fall and spring, for 10-week sessions.

The next Veterans Business Initiative starts on Monday, September 12th.