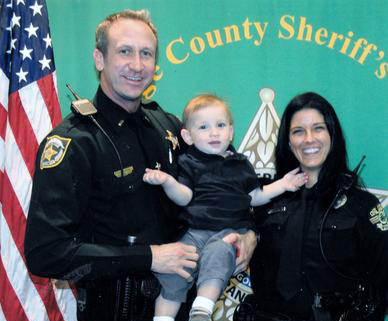 After narrowly escaping the past few election cycles as Sheriff of Orange County, Jerry Demings’ political career may soon becoming to an end.

Veteran Orange County deputy sheriff Spike Hopkins has been running a hard line campaign, putting intense focus on the spike in violent crime under Demings’ tenure. Mr. Demings reputation as more of a political hob knobber than boots on the ground leader has not helped the incumbent explain himself to voters.

Our Q&A with Mr. Hopkins is below.

My beautiful wife Shelby and I have a five year old son named Quintin. Law enforcement is a family profession, as Shelby and I both work with police departments in the Central Florida area. I first began serving Orange County as a Firefighter/EMT for the Orange County Fire Rescue Division back in 1986.

Two years later, I became a reserve deputy sheriff for Orange County. It only to me a year to realize that the sheriff’s office was the place I wanted to dedicate my life to and I’ve been there ever since.

Why run for Sheriff against an entrenched and powerful longtime incumbent?

First I am a cop who is a leader, not a politician. I will run the OCSO as such. Violent crime is at an epidemic proportion. After 7 years, the current sheriff formed an Anti-Violence task force.

Since that, there have been numerous murders, shootings and violent crimes. There has been no drop in these crimes. This shows his inability to fight crime.

In my professional career, I never forgot I was a cop and a leader. The current sheriff has done nothing to reduce crime in our community. He has over 400 murders and 100,000 burglaries under his watch. This is not acceptable.

Morale is at an all-time low. His troops do not feel supported by his administration and are leaving at an alarming rate. There are 130 deputy sheriff positions, which are fully funded, which he cannot fill.

For over 7 years, he has had the opportunity to make Orange County safer but has been unable to do so. I have a plan which will place more deputies on the streets, in neighborhoods, to reduce crime by presence and bringing Community Oriented Policing back to Orange County.

What are your plans for increasing patrols, response time, and trust with residents in East Orange County?

This sector starts at Semoran Blvd. and goes east to the Brevard County line. The sector also covers from the Seminole County line to Osceola County. There are over 400,000 residents in Sector 2. Here is one example of a deputy shortage, Zone 22 covers the Avalon Park, Waterford, Stoney Brook, and UCF area.

Over 250,000 resident live in this one zone. (More citizens than the entire City of Orlando), last Saturday there were only 3 deputies assigned to that zone during the day shift.

During the evening hours they are lucky to have 7 deputies. Could you imagine the City of Orlando only having 7 officer to cover their city? This is the neglect east Orange County feels. This is also a county wide issue.

The residents of Bithlo, Wedgefield and Christmas only have 1 deputy late at night. I know the Semoran area has been labeled Heroin Alley.

It’s a fact, people addicted to drugs will steal and rob to support their habit. I will fill the 13 vacant Narcotic Agent positions. How do we address the drug issue without drug agents to target our drug dealers? The sheriff’s current solution is to hire a private security company to patrol his crime ridden neighborhoods.

He has used $150,000 in government money to do so. When the sheriff has to hire a 3rd party company to do his job, that is a sign he is unable to control crime in his community. I would rather use the money to pay deputies overtime to patrol your community. A deputy can stop and arrest people. A security guard and can only observe and report.

I have identified 65 deputies I will immediately assign to the Patrol Division. We need deputies on the streets where crime is occurring. I will reduce the amount of time it takes to get new deputies through the recruiting process. I will not reduce the qualifications of the candidates.

Currently it takes approximately 9 months to process. This is too long. If the Valencia academy is too full, I will send recruits to neighboring police academies for training. Candidates who already have their police standards will be hired quickly and placed into patrol.

Deputies will now take ownership in that community to reduce crime and build on the idea of Community Oriented Policing.

Following the tragedy at Pulse, quick tips for people to spot a bad situation and how to react?

First, exercise your 2nd amendment right to own a firearm. Get a concealed weapons permit. Citizens will be the first to stop an active shooter or slow down their ability to murder more people.

I will also have a citizen training program on line for our citizens to learn three steps.

1. Leave the situation as fast as you can. Run and don’t stop. Don’t stand outside in case there are secondary devices or the shooter(s) come out.

2. If you cannot leave the building, shelter in place. Hide in areas where it will be difficult for the suspect(s) to find you. Lock doors and turn off lights. Barricade doors which open.

3. Fight for your life if confronted by the suspect. This could be your only opportunity to life.

Though the Pulse incident was a true tragedy, the people of Orange County need to know over 66 people have been murdered in the Orange County area this year (37 in unincorporated Orange County) and hundreds more shot. We have a violent crime epidemic in our own back yard which has not been addressed.

A citizen is more likely to be killed by our own fellow citizens and not terrorism. I will address our local crime and continue to identify and prevent further terrorist actions.

I will make our SWAT team full time where they will be out on the streets patrolling neighborhoods, but ready to respond to a high risk incident at a moment’s notice.

Overall, list some key point of your platform. What will make your method better than our current sheriff?

I have a plan to immediately stop the violent crime. The current sheriff has not been able to do this in over 7 years. More deputies in your neighborhoods.

Provide an app for smart phones which will inform residents of our communities why the police helicopter is flying around their neighborhood or a large police presence.  This will be done in real time. Suspect information will be given so they can be our “eyes and ears” in catching suspects.

I will not be a MIA sheriff. I will be available to the public and I look forward to patrolling the streets of Orange County every Friday night. I will lead by example.

Target aggressive drivers is very important. These drivers place our family and children at risk every day.

TV: Homeland on Showtime and HBO’s Band of Brothers (these men were true heroes). Band: Any 70’s disco music. Book: The Game of Thrones series has to be next on my list.