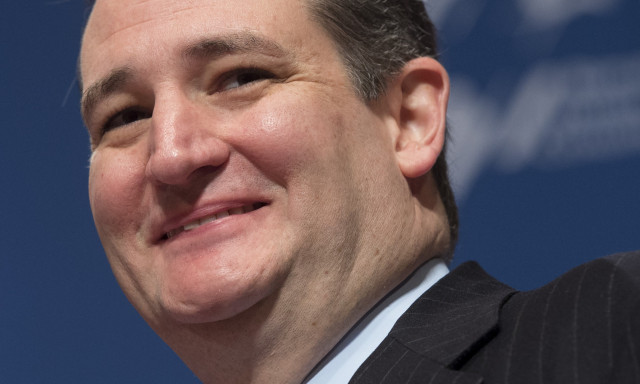 Why is Ted Cruz hiding his pentecostal past…

While Ted Cruz proudly proclaims he is an Evangelical Christian, his campaign takes pains to hide the truth that Cruz and his pastor father, Rafael Cruz are Pentecostal Christians, a fact further hidden by having Ted and Heidi Cruz’s belong to the congregation of First Baptist Church, a Southern Baptist church in Houston, as their home church.

Both Cruz’s parents, his father Rafael a Cuban-born immigrant, and his mother Eleanor, born in Wilmington, Delaware, grew up in Catholic families. Both were among the millions of that left the Catholic Church since the 1960s to embrace Pentecostalism, a Christian movement estimated to make up 4.4 percent of the U.S. population, accounting for some 13 percent of evangelical churches in the United States.

The name “Pentecostal” derives from the feast of the Pentecost, typically celebrated fifty days after Easter, and identified in the Acts of the Apostles 2:1-31 as the day when the Holy Spirit descended in “purifying fire” upon the Apostles of Jesus Christ, inspiring them to go forth from hiding in fear to proclaim the Gospel of Jesus Christ.

Heidi Nelson Cruz, Ted’s wife, is the daughter of Seventh-day Adventist missionaries, explaining why she spent part of her childhood traveling with her parents to places like Kenya. “Speaking in Tongues” Religion reporter Sarah Pulliam Bailey, writing in the Washington Post on March 25, 2015, was of the first to recognize Ted Cruz’s 2016 presidential campaign logo and the purifying tongue-of-fire logo used commonly to identify Pentecostal churches.

Here is the logo of the Church of Pentecost:

The symbol derives from Acts 2:3, writing about the descent of the Holy Spirit upon the Apostles, “They saw what seemed to be tongues of fire that separated and came to rest on each of them.”

Sarah Palin’s nomination as vice president put Pentecostalism into the spotlight, when the press revealed that from the time she was a teenager until 2002, Palin attended a church affiliated with the Assemblies of God that the Pew Research Center in an analysis published on Sept. 12, 2008, described as “the largest Pentecostal Christian denomination in the U.S.”

The Pew Research Center went on to note that Pentecostalism “emphasizes such practices as speaking in tongues, prophesying, divine healing and other miraculous signs of the Holy Spirit, which it believes are as valid today as they were in the early Christian church.”

“Ted is the anointed one”

Rafael Cruz is a pastor with Purifying Fire International Ministry, although in January 2014, as Ted Cruz was preparing his presidential swing, Rafael Cruz scrapped the group’s website after various blogs began identifying the ministry as rooted in “a radical Christian ideology known as Dominionism or Christian Reconstructionism.”

Dominionism calls on anointed Christian leaders to take over government to make the laws of the nation in accordance with Biblical laws. Rafael Cruz, at the Pastor Larry Huch’s New Beginnings mega-church in Bedford Texas, outside Dallas, on Aug. 26, 2012, in a Dominionist sermon proclaimed his son, Ted Cruz, to be the “anointed one,” a Dominionist Messiah who would bring God’s law to reign.

At a Dominionist pastor’s meeting held at the Marriott Hotel in Des Moines, Iowa, on July 19 and 20, 2013, the following “anointing prayer” was read over.

So to pull all this logic together, God anoints priests to work in the church directly and kings to go out into the marketplace to conquer, plunder, and bring back the spoils to the church. The reason governmental regulation has to disappear from the marketplace is to make it completely available to the plunder of Christian “kings” who will accomplish the “end time transfer of wealth.”

Then “God’s bankers” will usher in the “coming of the messiah.”

The government is being shut down so that God’s bankers can bring Jesus back. In an editorial published in the Washington Post on Feb. 4, on the heels of Cruz’s victory in the Iowa GOP primary, John Fea of the Religion News Service published an op-ed piece noting the frequent references Ted Cruz makes in stump speeches to his father “the traveling evangelist” Rafael Cruz.

“During a 2012 sermon at the New Beginnings Church in Bedford, Texas, Rafael Cruz described his son’s political campaign as a direct fulfillment of biblical prophecy,” Fea wrote. “The elder Cruz told the congregation God would anoint Christian ‘kings’ to preside over an ‘end-time transfer of wealth’ from the wicked to the righteous. After this sermon, Larry Huch, the pastor of New Beginnings, claimed Cruz’s recent election to the U.S. Senate was a sign he was one of these kings.”

Fea noted that Rafael Cruz and Larry Huch preach a brand of evangelical theology known as Seven Mountains Dominionism. The name comes from Isaiah 2:2, “Now it shall come to pass in the latter days that the Lord’s house shall be established on top of the mountains.”

By identifying Ted Cruz as the “anointed one,” Rafael Cruz has designated his son as what he believes is God’s choice to lead an evangelical coup d’etat, such that, as Fea notes, “Cruz’s campaign may be less about the White House and more about the white horses that will usher in the God’s Kingdom in the New Testament book of Revelation, Chapter 19.”