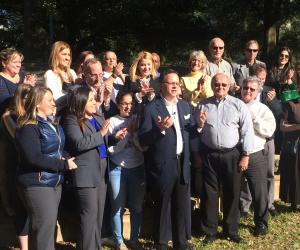 After nearly a month of toying with the idea of a bid for Orange County Commission, United Global Outreach leader Timothy McKinney has officially thrown his hat into the ring. McKinney who has become known as a tireless advocate for the impoverished East Orlando community of Bithlo over the past six years, was joined by over fifteen supporters and volunteers.

“We are hear today because of our current County Commissioner Ted Edward’s absolute refusal to listen to the pleads of his constituents. Whether it is on affordable housing, improving roadways, or solving the issue of chronic homelessness… he has consistently ignored the voice and will of the people.”

A resident of Orange County for four decades, McKinney is the 4th candidate to file for this race. He joins marketing executive Gregory Eisenberg, self-proclaimed environmentalist Emily Bonilla, and incumbent Ted Edwards.

Anna Eskamani, a founding member of the bi-partisan Project Bithlo effort, has worked with McKinney for several years was present to support the campaign launch.

“As an east Orlando native and UCF grad I am thrilled to see Tim formally jump into this race. Tim has showcased his tenacity to get things done in a smart and collaborate way. He would be a wonderful addition to the County Commission.”

Also in attendance was Thomas Rebman, a high-profile homelessness activist who has become know as “The Homeless Teacher”, after deciding to live homeless across the country during his summer break from teaching in Orange County.

While McKinney is running for the first time, he is well connected through his non-profit work and is known as a consensus builder and problem solver. He is expected to be able to raise a significant amount of money, and activate his base in the District 5 stronghold of Winter Park and East Orange County.