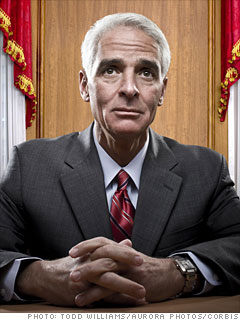 Tampa Superlawyer John Morgan has pledged to put an Constitutional Amendment on the 2014 ballot that would let doctors prescribe marijuana to their patients who might derives some medicinal benefits from it. At the same time Mr. Morgan plans to install his employee Charlie Crist in the Governors mansion. Mr. Crist ,who “works” at Morgan’s law firm can be seen on billboards but not in any courtrooms.

Morgan recently decided to junk 30,000 good signatures that had been drafted to put the Constitutional Amendment on the ballot and have a Law Professor rewrite the Medical marijuana amendment. The redraft says that if the Amendment passed and Florida’s notoriously right wing legislature failed to authorize the opening of the dispensaries a sick or dying patient could …….sue. The redrafted amendment makes no provision for an individual who is ill to grow and harvest their own plants or have a care-giver grow a minimum number of plants for them as other states who have legalized marijuana have done.

When I raised this question in an op-ed piece, Ben Pollara, a lackey of Mr. Morgan  “pointed out that the amendment says that, if the state doesn’t act within nine months, physicians could recommend marijuana to a qualifying patient anyway. And qualifying patients, such as Bradenton-area activist Cathy Jordan, would be allowed to possess and use the drug under state law.”

Not so. People who are sick or dying would still be subject to the 2009 Florida Marijuana Eradication Act  which still provides for a minimum five year jail sentence for possession of just one oz.of marijuana. And who pushed and signed this harsh law? Why that would be Governor Charlie Crist!

Charlie Crist pushed the harshest anti-pot laws in the nation.

Even with a doctors prescription there is no guarantee that Sheriff’s offices and police departments would hesitate to send in jack-booted swat teams to kick down doors and  arrest those who are growing and confiscate there medicine. The Manatee County Sheriff’s office did exactly that to valiant Marijuana activist Cathy Jordan and her husband only months ago. Jordan suffers from ALS. Because of the public uproar no charges were filed against this brave woman and her husband.

Miami-Dade County had the ninth most arrests for possession of any county in the country, and Broward and Orange Counties had the 16th and 23rd most arrests, respectively.

Now, suddenly, Charlie Crist tells Adam Smith  of the Tampa Bay Times he is for the legalization of marijuana for medical purposes. One can only conclude that Mr. Morgan’s ruse of putting a flawed proposal on the ballot is a wedge issue designed to turn out the vote for Mr. Crist- and sick and dying people are merely a pawn in this sorry political game.

Roger Stone is a legendary American Republican political consultant who has played a key role in the election of Republican presidents from Richard Nixon to Ronald Reagan to George H.W. Bush and George W. Bush. Stone is the author of “The Man Who Killed Kennedy – the Case Against LBJ” (Skyhorse).