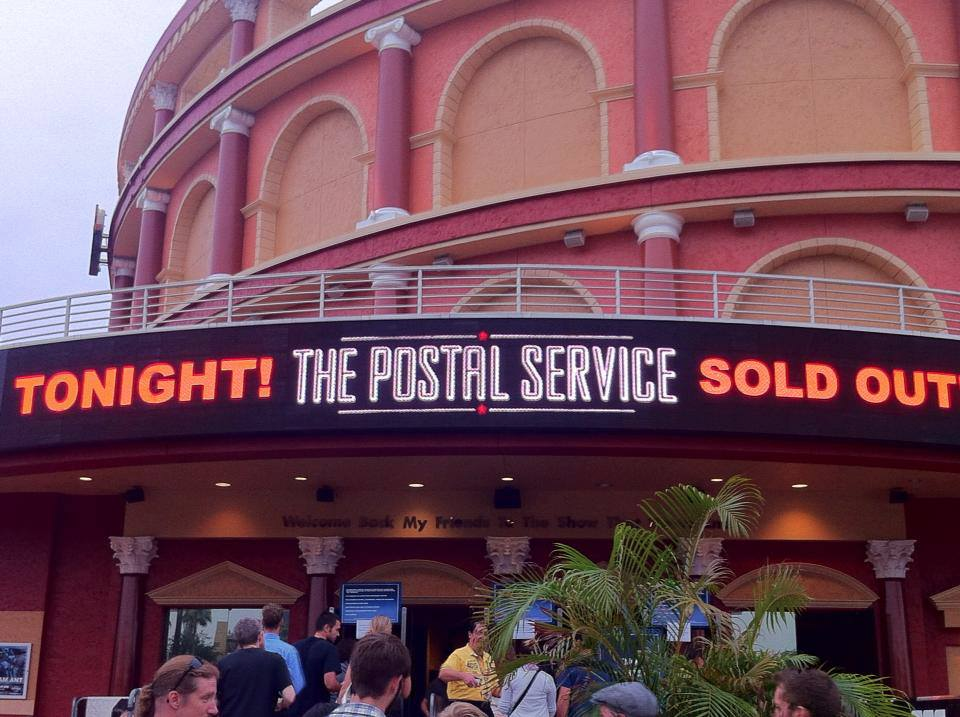 A few weeks ago I wrote an article predicting why June 5th is the most important date of the year. As anyone who went to The Postal Service show can assure you, my prediction was correct. It was by far the best concert that I have ever been to. The opening act, Ra Ra Riot, had a very difficult time opening for such a huge band. During the first half of their set, the entire floor was motionless. Hardly a single person was so much as bobbing their head to their show. I wouldn’t go so far to say that it was their fault, they sounded almost identical to their studio recordings and Wes Miles did a fantastic job of filling the stage. There was just something off-putting about such a large band (equip with Rebecca Zeller on violin and Alexandra Lawn on cello) producing a sound that was warm at best. By the end of their set, they had only gained as light momentum and the crowd was less than “feeling” it.

The stage was quickly broken down and it wasn’t very long until those familiar three-chords of The District Sleeps Alone pierced the anticipation. Ben Gibbard, Jimmy Tamborello, and Jenny Lewis form what Ben described as the imaginary band. The band is typically only represented as the duo (Ben and Jimmy) since they contributed to most of the formative lifting. In comparison, the sound of those two blew Ra Ra Riot and every other band I’ve seen out of the water. It was like walls of sound and waves of nostalgia in a way that only The Postal Service can capture. Laura Burhenn, of The Mynabirds, also contributed to the set. Burhenn has gained popularity recently in Omaha for working with Bright Eyes on their last album The People’s Key and supporting them on tour as well. The show featured all of Give Up as well as both new songs released on their newest remaster. Surprisingly, they performed an encore with the Dntel song Dream of Evan and Cham which inspired Ben and Jimmy to form The Postal Service.

It took The Postal Service ten years to follow up to both their show in Orlando and Give Up. Hopefully, it won’t be another ten years until we hear more from The Postal Service. If the opportunity to see them ever arises again, I highly recommend seeing them.

William Butler is a psychology and pre-medical student at the University of Central Florida. He works as a receptionist for UCF Health Services at the College of Medicine in Lake Nona, Fl. He also volunteers for the MIT-2 lab, IMAlive suicide hotline, and UCF Counseling and Psychological Services Student Advisory Council. He is interested in neuroscience, music, and spending time with his friends and family. Despite his wide range of interests, William is NOT a medical or mental health professional and all attitudes expressed are opinions and are not intended to be used as medical advice.